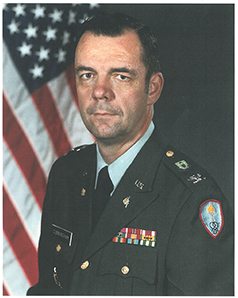 Colonel Patrick J. Cunningham, who served as Executive Director of the Buffalo and Erie County Naval and Military Park since 1993, has died. He would have been 79 on April 1.

Director of the Buffalo and Erie County Naval and Military Park since 1993, has died. He would have been 79 on April 1.

Colonel Cunningham, who grew up in Kenmore, N.Y., returned to Buffalo in 1989 after retiring from the U.S. Army, with which he held a variety of sensitive and demanding command and staff positions, including 13 years at the Pentagon. His assignments there included handling the budget for all active duty and retired Army personnel, and coordinator of new and innovative projects for the Department of Army Inspector General. His Washington tours culminated in successive assignments as Executive Officer for the Director of the Army Budget, and subsequently, the Comptroller of the Army. His last five years of active duty were spent as Garrison Commander and Chief of Staff of Fort Benjamin Harrison, Indiana. The Colonel’s military decorations include the Legion of Merit with three oak leaf clusters, Bronze Star Medal, Meritorious Service Medal and Army Commendation Medal with two oak leaf clusters.

“Colonel Cunningham will be remembered in Buffalo for his tireless efforts at building the Buffalo Naval Park into the wonderful education and historic attraction it is today,” said Naval Park Board Chairman Donald A. Alessi. “He was instrumental in moving the park from its former site underneath the Skyway to its beautiful current location. He spent a career in service and sacrifice to his country — and he continued that commitment throughout his retirement. His vision turned our Naval Park – which is today the largest inland Naval Park in the U.S. — into the crown jewel we have on our waterfront today.”

Colonel Cunningham’s passing comes, ironically, on the eve of the opening ceremony for the Naval Park’s 2017 season. The event, which will celebrate the 40th anniversary of the arrival of its first two ships, the USS Little Rock and USS The Sullivans, and posthumously honor the roles of three servicemen who were instrumental in the delivery of these ships to Buffalo’s Harbor, will now include a dedication of the 2017 season to the memory and spirit of Colonel Cunningham.

“Many years ago when the park was struggling financially, Colonel Cunningham used his own money to make ends meet — to literally keep us above water. And he did so without a word or expectation of thanks,” added Chairman Alessi. “Today, and for years to come, the greater Buffalo community and Western New York Veterans owe him a great deal of thanks and gratitude.”

Colonel Cunningham was a graduate of Canisius College, where he earned a bachelor’s degree in Sociology. He went on to earn an M.B.A. from Syracuse University in Comptrollership, in addition to completing U.S. Army Command and General Staff college.

In addition to the Naval Park, he served numerous organizations in many capacities, including past president of the Historic Naval Ships Association, Military Officers Association of Western New York, Navy League, and the New York State Council of Chapters, Military Officers Association of America. He also belonged to the Greater Niagara Frontier Council of the Boy Scouts of America, Vietnam Veterans of America, American Legion, and Rotary Club of Buffalo. He also served as a game official for both High School basketball and football in Western New York.

He was pre-deceased by his wife of 53 years, Shelia, with whom he had five children.

Captain Roche served for 36 years in the United States Coast Guard, rising through the ranks of Seaman Apprentice (E-2) to Captain (O-6). He is an accomplished leader and dynamic planner with unique team building skills and broad experience in fiscal management, operational execution, human resources and risk management. He came to Buffalo in 2013 as Chief Executive Officer/Sector Commander of the Coast Guard’s Sector Buffalo, were he managed 1,200 employees accomplishing missions across 540 miles of coastline, including 2,300 search and rescue efforts. He retired in 2016. His selection comes at the recommendation of Colonel Cunningham, whose declining health had been eminent.

Captain Roche most recently served as Vice President with Harkon, Inc., where he oversaw human resource doctrine development/review and international training program management. He resides in Clarence Center with his family.

To learn more about the Buffalo and Erie County Naval and Military Park, including the Colonel Patrick J. Cunningham Legacy Society, visit www.buffalonavalpark.org or call (716) 847-1773.

ABOUT THE BUFFALO AND ERIE COUNTY NAVY AND MILITARY PARK

The Buffalo and Erie County Military and Naval Park takes you inside history with incredible exhibits and displays including actual historic documents, uniforms, military gear, photographs and so much more. Its mission is to honor veterans and inspire citizens. It fosters an appreciation of the U.S. Armed Forces in the community by promoting visits to the Park and taking part in activities related directly or indirectly to military affairs. It also promotes and fosters an interest in historic Armed Forces artifacts of our nation. For those interested in supporting the Naval Park by volunteering or making a gift, please call 716-847-1773 or visit www.buffalonavalpark.org/support-us.

Buffalo, N.Y. – March 25, 2017 – The Buffalo and Erie County Naval and Military Park kicked off its 2017 season this morning with an Opening Day Ceremony. The Naval Park, a defining component of Buffalo’s waterfront since 1979 and a key part of its recent resurgence, is celebrating the 40th anniversary of the arrival of its first two ships, the USS Little Rock and USS The Sullivans, in 1977.

The ceremony began with a dedication of the 2017 season to the “spirit and memory of Col. Patrick J. Cunningham,” the Naval Park’s Executive Director since 1993, who passed away yesterday. Park officials also introduced their new Executive Director, Captain Brian W. Roche, a 36-year Coast Guard veteran who was appointed during its Thursday board meeting.

Officials also posthumously honored three servicemen who were instrumental in the delivery of the Little Rock and the Sullivans to Buffalo: Michael Bertini, Thomas Heilig and Leonard Sniadecki. Their families received Recognition Award Certificates from Naval Park Board Chairman Donald A. Alessi.

“It is with very mixed emotions that we kick off our season today,” said Chairman Alessi. “We are excited to begin it by honoring the memories of these three fine servicemen, who played such pivotal roles in bringing us these two iconic vessels. We’re proud to continue to provide military and naval history right here on the Buffalo Waterfront. It is going to be a great season.”

However, attendees were saddened by the loss of Colonel Cunningham, who will be remembered for his tireless efforts at building the park into the wonderful attraction it is today.

“Colonel Cunningham was instrumental in moving the park from its former site underneath the Skyway to this beautiful location we enjoy today,” Chairman Alessi continued. “He spent a career in service and sacrifice to his country — and he continued that commitment throughout his retirement. His vision turned our Naval Park — the largest inland park in the U.S. — into the crown jewel we enjoy on our waterfront today.”

In addition, attendees were excited to meet and hear from Captain Roche, who Colonel Cunningham fully endorsed as his successor.

“Captain Roche served for 36 years in the U.S. Coast Guard,” Chairman Alessi concluded. “He is an accomplished leader and dynamic planner with broad experience in fiscal management, operational execution, human resources and risk management. He has been in Buffalo since 2013, so he’s no stranger to Western New York. He has a strong vision for our Naval Park, and we’re excited to support him in making this resource even more valuable to our veterans and our community.”

“It is truly an honor to be appointed as the Executive Director of the Buffalo and Erie County Naval and Military Park,” said Captain Roche. “The Naval Park is one of Buffalo’s true, unique treasures that the park staff and I feel privileged to be a part of. The Park has new exhibits to see and more to come in the future, and I hope every family takes a trip to Canalside to experience our park this year.”

The Naval Park has many large-scale events happening this season including its annual Party in the Park fundraiser on Aug. 22. This popular event is hosted right on the deck of the USS Little Rock and raises money to support all aspects of the Park, which receives less than three percent of its funding from government entities. Then, in late September, Buffalo hopes to be the site of a national first when it welcomes the newly constructed USS Little Rock LCS-9, which is tentatively scheduled to be officially commissioned into service. This would be the first time in U.S. Navy history that a new ship is commissioned alongside her original namesake.