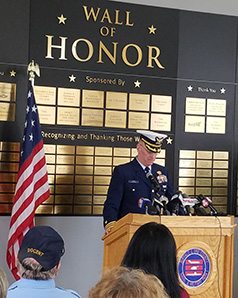 Captain Brian Roche announces that Friday, May 12 – and every Friday of WNY’s Armed Forces Week thereafter – will now be known as Lieutenant Commander Ralph C. Wilson Jr. Day at the park, and will include free admission for all.

LCDR Wilson, who left a gift to the Naval Park upon his passing in 2014, was a proud veteran who rose to the rank of Lieutenant Commander in the U.S. Navy and served as Commanding Officer of a World War II Minesweeper, the USS Picket, from March 1945 to January 1946.

The new display was unveiled during a ceremony in the Hangar Building, the future site of the Naval Park’s new Hall of Honor, currently in the design stages.  The ceremony included a presentation of colors by the Maritime Charter School Honor Guard and a performance of the National Anthem by Buffalo Dolls Vocalist Donna Kerr

Also, a surprise announcement was made to the public and to Mrs. Mary Wilson, LCDR Wilson’s widow, that tomorrow — and the Friday of every annual Western New York Armed Forces Week thereafter — will now be known as “LCDR Ralph C. Wilson Day” at the Buffalo & Erie County Naval & Military Park.  On that day, admission will be free for all visitors, to honor his legacy.

“By creating this day, we hope to immortalize LCDR Wilson for generations to come, so that we will always remember how much he meant to and cared for Western New York,” said Captain Brian Roche, Executive Director of the Naval Park.  “We are honored to display his personal military effects here at the park, and we thank his family for their generosity in sharing and entrusting these items to us.”

To commemorate the occasion, Buffalo Mayor Byron Brown read a city proclamation.   Proclamations were also delivered from the New York State Senate and Assembly via Senator Chris Jacobs’ office and Assemblywoman Monica Wallace’s office, respectively.  Representatives from Erie County Executive Mark Poloncarz were also on hand to mark the occasion, as were members of the park’s board of directors and staff.

“It is wonderful and heartwarming to see the support from our elected officials regarding this initiative,” added Naval Park Board Chairman Don Alessi.  “They understand how great of an impact LCDR Wilson had on this community, and the pride he felt for his military and civic service.”

The Naval Park is open daily from 10 a.m. to 5 p.m. through the end of October.  Its World War II era ships include the USS Little Rock — the only guided missile cruiser on display in the U.S. today; the USS The Sullivans, a destroyer named after five brothers who died when their ship sank during the Battle of the Solomon Islands; and the USS Croaker, a Gato-class submarine.  A variety of military vehicles and aircraft are also on display, in addition to a museum building filled with artifacts, interactive exhibits and historical information spanning virtually all of our nation’s wars and military conflicts. 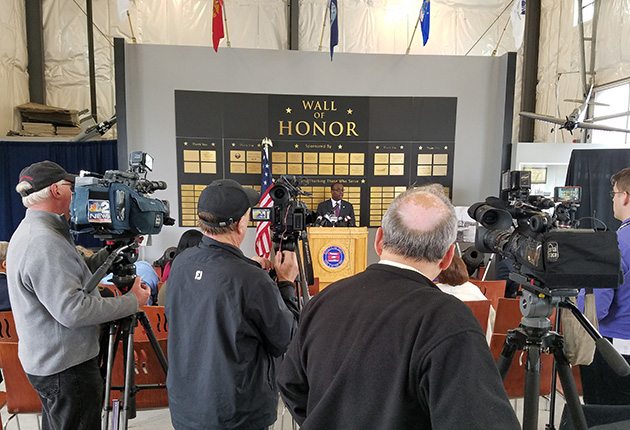 Buffalo Mayor Byron Brown reads a proclamation announcing that Friday, May 12 would be Lieutenant Commander Ralph C. Wilson Jr. Day in the City of Buffalo. 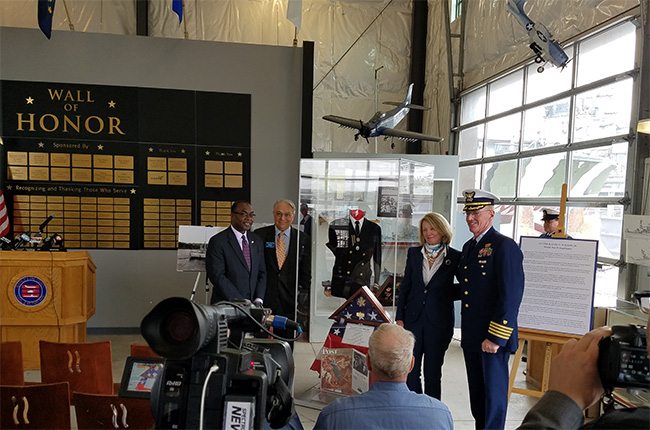 Unknown Stories of WNY: The story of the Croaker and the Sullivans
It's Official, LCS 9 Will be Commissioned at Canalside in Buffalo
VA Press Conference at the Buffalo Naval Park
Join us in November for a Toast to the Troops!
Buffalo Naval Park Opens For 37th Season
ATTENTION: We are Looking for WNY Veterans of Operation Desert Storm
The new USS Little Rock: ‘Bring her to life’
The "I Pledge Allegiance" Challenge Becomes Patriotic Gesture