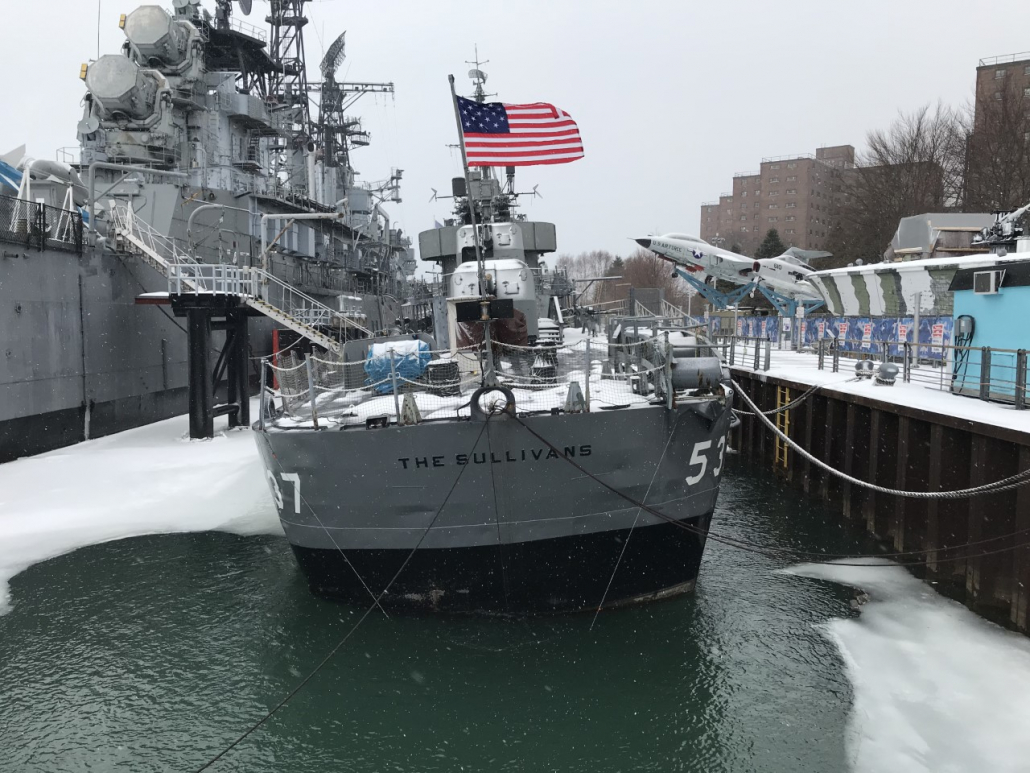 BUFFALO, NY – Officials from the Buffalo and Erie County Naval & Military Park were already facing a difficult winter offseason due to lost revenue from the pandemic. Now, harsh Buffalo winter weather and damaging winds have created a serious situation for the largest inland naval museum in North America. USS The Sullivans (DD-537), a 78-year-old Fletcher-Class destroyer and major attraction at the Naval Park, is in danger of sinking unless emergency repairs can be made to her hull.

“Routine hull maintenance is required with ships of this age.” commented Paul Marzello, president and CEO of the Buffalo and Erie County Naval & Military Park. “The harsh Buffalo winter weather has severely damaged the hull of USS The Sullivans below the waterline so there is significant water coming into the ship. She is currently listing to port quite noticeably. If we cannot repair the hull and stop the water, she will sink.”

The Naval Park has a plan for long-term repair to the hull of The Sullivans that was scheduled to begin in the spring and summer of 2021. With a cost of more than $1,000,000, the Naval Park is awaiting final funding from a number of sources.

The Naval Park is using pumps to remove water from the ship; however they are struggling to keep up and more damage could occur. “We expect another four to six weeks of tough weather ahead, so there is potential for even more hull damage. At this point the ship requires $100,000 in emergency repairs just to keep her afloat until we can begin the long-term repairs. We are asking for help from the public to raise the $100,000. We need All Hands on Deck to help.”
added Marzello.

The Park, which welcomes more than 70,000 visitors in a typical year is a major tourist attraction for the region. The Park saw a significant decline in visitors and revenue due to the pandemic restrictions. In July of 2020 the Naval Park launched a major fundraising campaign called All Hands On Deck to raise money to support Park operations. Given the urgent need to pay for the emergency hull repairs, the Naval Park is extending the All Hands On Deck campaign and asking for donations from the general public. Contributions can be made securely online at keepingourshipsafloat.org or by contacting the Naval Park at 716-847-1773.

About the Buffalo and Erie County Military & Naval Park
In 1976, the Buffalo Urban Renewal Agency and a group of community supporters gathered together to create a non-profit organization in order to submit a request to the U.S. Navy for a decommissioned naval vessel as part of a waterfront development plan.

The Navy granted their request, and in 1977, donated a destroyer and a guided missile cruiser to the City of Buffalo. After two years of fundraising and restoration, the newly formed organization opened to the public on July 4, 1979. In subsequent years The Park has added substantially to its collection of military artifacts.

The Park is the largest inland naval park in the country. Western New York is home to one of the largest concentrations of military veterans in the United States making The Park a popular attraction as well as a center of pride with this stakeholder group.

More information about The Park is available at buffalonavalpark.org.