Earlier this week Jerry Reilly’s 91-year-old cousin sat on the porch of her Old First Ward home the two had shared as children.

She reminisced about the World War II sailor who died 75 years ago with the five Sullivan brothers and nearly 700 other shipmates aboard the USS Juneau.

Betty Barrett did not hold back in sharing Reilly’s tough upbringing. She knew it would be tempered by the praise her cousin received at Friday’s memorial service on the cobblestone sidewalk next to the USS The Sullivans at Buffalo & Erie County Naval and Military Park.

The story of the Sullivan brothers is well known. From Iowa, they had all enlisted following the Dec. 7, 1941, attack on Pearl Harbor. Despite resistance from the Navy, they were granted their wish to “stick together” and were all assigned to the doomed Juneau.

BUFFALO, N.Y. — Sept. 24, 2017 — Today the Buffalo & Erie County Naval & Military Park officially unveiled a new plaque that will serve as a memorial to families who have lost a family member during military service. Known as “Gold Star” families, they were honored on National Gold Star Mother’s Day, the last Sunday of September annually. 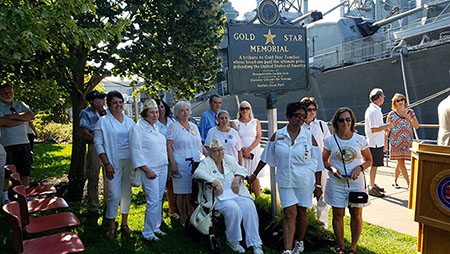 Several Western New York Gold Star Mothers gather at the new Gold Star Memorial marker unveiled today at the Buffalo Naval Park. Each has lost a child during military service to our country. This new memorial serves to remind our community of the sacrifice which they and their families have endured.

The new Gold Star plaque is adjacent to the previously existing Blue Star plaque, which recognizes the sacrifice all families with loved ones serving in the military endure. The new marker was funded by the Bowmansville Garden Club, which has a special focus on Gold Star families in many of the gardens they design, including the Russell J. Salvatore Patriots and Heroes Park and the Theodore Roosevelt Inauguration site.

The ceremony was held on the Veterans Park Promenade, which is open year around to the public at no cost. State Senator Chris Jacobs and State Assemblyman Mickey Kearns were on hand to express their gratitude and honor the sacrifices made by the Gold and Blue Star families present. They were joined by Naval Park board and staff members, the Erie County Sheriff’s Pipes & Drums Patriot Guard Riders, and numerous veterans.

The Blue Star military service flag was first created during World War I by a father to recognize his two sons battling in the front line of duty. It features a red border and white interior with a blue star in the center. In more recent years, the Gold Star flag was developed, following the same design. It is hung during wartime to recognize the families of those who have lost loved ones through their military service.

The ceremony began with remarks from the Naval Park’s Executive Director, Captain Brain Roche, who expressed his deepest condolences for the relatives of our fallen heroes.

“The families who have joined us here today, as well as many more across Western New York and beyond, have suffered the ultimate grief, while their sons, daughters or family members gave us the ultimate sacrifice,” Capt. Roche said. “This marker now displayed here on the Veterans Promenade will remind passersby — including the visitors we receive annually from all 50 states, and over 100 countries — of these sacrifices. We hope it will cause them to pause, reflect and express some form of gratitude to you and your loved ones for all you have given us, and all you have endured.”

An invocation was led by Gold Star Mother Holly Baker of Springville, N.Y., the mother of U.S. Army Specialist Brain Baker (10th Mountain Division), who was killed in action in 2004 during Operation Iraqi Freedom. Ms. Baker is a former President of the American Gold Star Mothers South Buffalo Chapter No. 26. 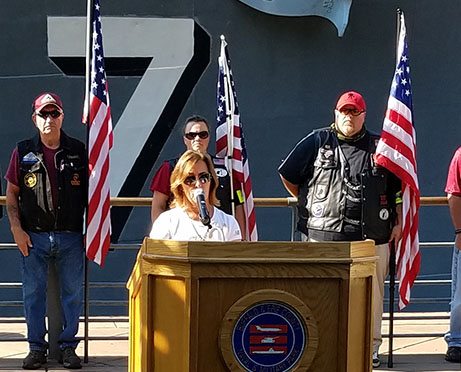 Sandra Krege, president of the American Gold Star Mothers South Buffalo Chapter No. 26, addressed those in attendance about the significance of the new addition of the Gold Star Memorial marker. Ms. Krege’s son, U.S. Army PFC Travis Krege, was killed in action in Operation Iraqi Freedom in 2006.

“It is certainly fitting that today, on Gold Star Mother’s Day, we unveil this Gold Star marker in recognition of your devoted presence in this community,” Naval Park Chairman Don Alessi added, addressing those mothers in attendance. “Yet, it is even more fitting that this ceremony follows the 75th anniversary of the death [during the sinking of the U.S.S. Juneau] of the five Sullivan brothers, for which our destroyer is named. While the Sullivans reunion committee paid tribute to the five brothers for their ultimate sacrifice, they did not forget Aletta Sullivan, perhaps the most well-known Gold Star Mother, for her enduring loss.”

Mr. Alessi also expressed his gratitude to the Bowmansville Garden Club for its generosity before introducing Sandra Krege, the current president of the American Gold Star Mothers South Buffalo Chapter No. 26. She lost her son, U.S. Army PFC Travis Krege, who was also killed in action during Operation Iraqi Freedom in 2006.

“This is not a club that anybody chooses to belong too,” Ms. Krege explained. “I hope, when people read this new marker, they understand what these families have gone through, and what they have sacrificed for us all. We lost our only son, our first born. His sibling lost her big brother. At every holiday, there is a hole at our table. There’s a birthday that we never get to celebrate. But a history unlearned is doomed to repeat itself, and there are many lessons to be learned here in this park. I really appreciate the significance of today. It’s very special and important to me.”

The ceremony concluded with the unveiling the new marker, the playing of “Amazing Grace” on bagpipes, and several photos with the Gold Star Mothers, all dressed in white and gold, around the new memorial.