BUFFALO, N.Y. — Aug. 26, 2017 — Colonel Patrick J. Cunningham spent 30 years in active military service with the U.S. Army. He went on to serve as Executive Director of the Buffalo & Erie County Naval & Military Park from 1993 until his death this past March. Today, he was honored at the Louis R. Palma Veterans Tribute Awards Ceremony, as the Park unveiled a new display that included the late colonel’s U.S. Army mess dress dinner jacket with medals, an array of photos and a special portrait.

Col. Cunningham grew up in Kenmore, N.Y., and returned to Buffalo in 1989 after retiring from the U.S. Army, with which he held a variety of high-profile command and staff positions, including 13 years at the Pentagon. As executive director of the Naval Park, he spent the final 24 years of life dedicated to celebrating Western New York’s veterans, creating the nation’s largest inland naval park, and launching Buffalo’s initial Canalside waterfront attraction.

“Colonel Patrick J. Cunningham was a pillar of leadership, professionalism and team building on the Buffalo waterfront for over two decades,” said Captain Brian Roche, who was named the park’s Executive Director following the colonel’s passing. “The Naval Park’s Board of Directors and staff have dedicated this year to remembering Col. Cunningham, to formally recognize him for all that he did for the park and the Western New York Community.”

He always viewed the park as “a symbol of the region’s patriotism, dedication and sacrifice,” he once said. His dedication to it was so great that he personally funded the park, including its payroll, during its leanest times, without ever saying a word or expecting to be repaid.

“No one was more dedicated to preserving, maintaining, and promoting the Buffalo & Erie County Naval & Military Park than Col. Patrick Cunningham,” added Naval Park Board Chairman Don Alessi. “Without him the Park would not have the physical or historic presence that it enjoys today. He was truly the heart and soul of the operation and we were all honored to have served with him.”

The ceremony was attend by many members of the Colonel’s family, including his brother, Bishop Robert J. Cunningham of the Diocese of Syracuse, who delivered the invocation, and his daughter, Colleen Burns, who delivered the eulogy. It also featured Master of Ceremony Domenic Cortese, a radio host with WBEN-AM, presentation of colors by park docents, and music from The Friends of Harmony.

The exhibit that was unveiled during today’s ceremony honoring Col. Cunningham will be in the Hangar Building for the remainder of the season, and then moved up to the USS Little Rock’s Chief of Staff office for permanent display.

A veteran of World War II and the Korean and Vietnam wars, Louis R. Palma, began active duty at the age of 15 as a Navy Air Crewman in the South Pacific during WWII. He served in the Korean War from 1950 to 1952, and joined the U.S. Air Force Reserves in 1953, where he served on special assignments as a flight engineer in Vietnam. In between those calls to duty, Mr. Palma obtained a Bachelor of Science degree in Business Administration from Canisius College in 1955. Although he eventually retired from the reserves in 1988, Louis Palma returned to civilian life demonstrating many more years of exemplary service to the Western New York veteran community.

Most notably, it was primarily due to his leadership and commitment to the veterans and their families that the organizational structure and management of the veterans’ service division of Erie County was re-established, and state accreditation for the region was reclaimed. In 2000, at the age of 72, Mr. Palma worked to assist countless veterans and their families by accepting an appointment as Erie County director of veteran’s services, a post he held until 2009. He passed away just three years ago, in August 2014, at the age of 86. If it were not for the efforts of Palma, the veterans’ division would have remained ineligible for state certification.

In acknowledgement of his committed service, Palma received numerous medals such as the Asiatic Pacific Campaign Medal – with six battle stars and the Presidential Unit Citation. As such, it is with respect to the aforementioned-service and work history of Mr. Louis R. Palma that the Buffalo and Erie County Naval and Military Park honored Mr. Palma with this annual awards tribute distinction.

“The number of visitors at Canalside continues to grow, as does the impact the revitalized waterfront is having on our community,” said Jacobs. “Major investments in these projects will help get them completed as soon as possible, ensuring that we continue to build on the momentum already underway.”

Each project will be the recipient of a $500,000 state grant for a combined investment of $1.5 million in new development and construction.

“Investing in these three waterfront projects in downtown Buffalo and Canalside will continue to shine a spotlight on our City’s natural beauty and ensure city residents can further enjoy new and exciting exhibits that create jobs, while attracting even more tourists to one of our City’s most popular destinations,” said Buffalo Mayor Byron Brown. “I thank Senator Jacobs for helping us secure funding for these major attractions.”

“The Buffalo & Erie County Naval & Military Park’s Board of Directors and Staff greatly appreciate Senator Jacobs’ most gracious support of a $500,000 grant for the Park,” said Captain Brian Roche, USCG (ret) and Executive Director. “The grant will be used to support the construction of a Hall of Honor. Once completed, the updated building will highlight the heroic actions by Western New York veterans.”

Douglas Love, CEO of Explore & More said, “We are very grateful for the Senator’s continued support and vision for Canalside as a family friendly destination. We are about engaging children with exciting, interactive exhibits and programs that will inspire them to discover their world. Also, studies have shown, the Museum’s economic impact will bring approximately $208 million to the area in the next 10 years.”

“On behalf of the Buffalo Heritage Carousel, we are extremely appreciative for this generous support from Senator Jacobs for our solar powered, historic 1924 Spillman Engineering carousel,” said President Laurie Hauer-LaDuca. “These funds will assist in the restoration of the carousel and the design and construction of its building, bringing new life to this rare gem that will be enjoyed by generations to come.”

All three projects are anticipated to be completed in late 2018. Jacobs said he believes that the economic impact to the region will be greatly enhanced by these permanent structures.

“The success of these projects will do so much more besides enriching the overall Canalside and waterfront experience for everyone who visits,” said Senator Jacobs. “They will create jobs, attract more visitors and spending from outside the state and region, and further advance our goal of Buffalo’s waterfront becoming a year-round destination,” he concluded. 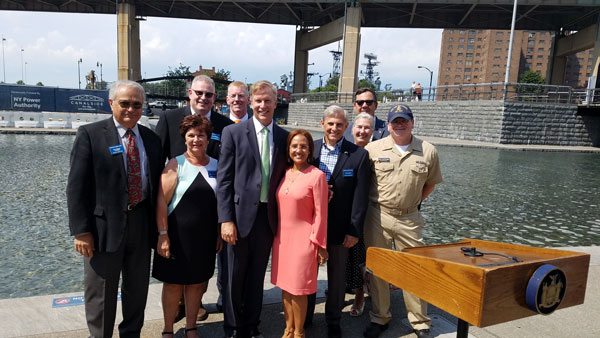 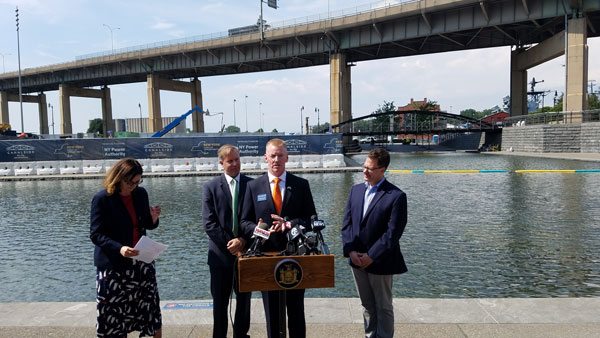 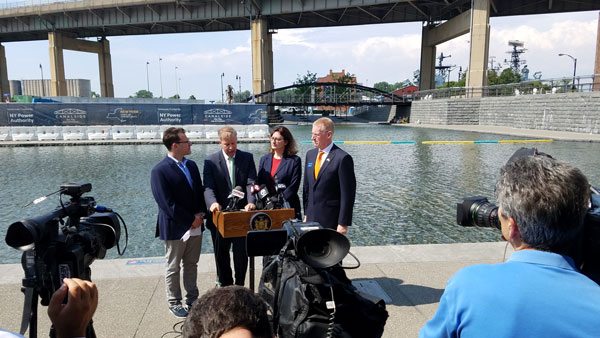 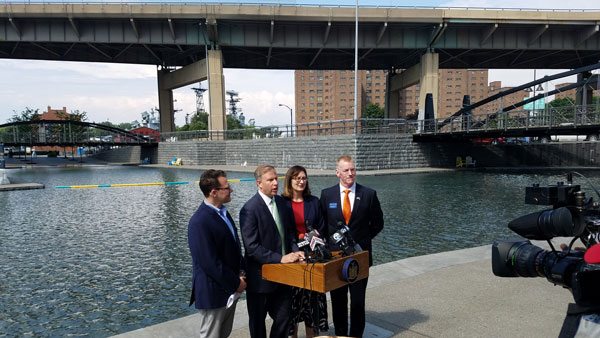